Hong Kong has never been short of good hotels: big names like The Peninsula, Mandarin Oriental and Four Seasons have set the bar sky-high, ensuring that the city has one of the highest average room rates around; while smaller, urban-chic brands like Tuve and OZO Wesley Hong Kong are doing themselves proud on the boutique side of things. It’s no surprise that the island’s burgeoning hotel scene has piqued the interest of several global groups, who are following suit and thinking outside the box to evolve their brands in order to attract Hong Kong’s creative class travellers. Here are three brand-conscious hotels in Hong Kong to watch:

Park Lane Hong Kong has been around for over 40 years, and has always been one of the most popular business hotels in Hong Kong, with convenient transportation and jaw-dropping views of the Victoria Harbour. 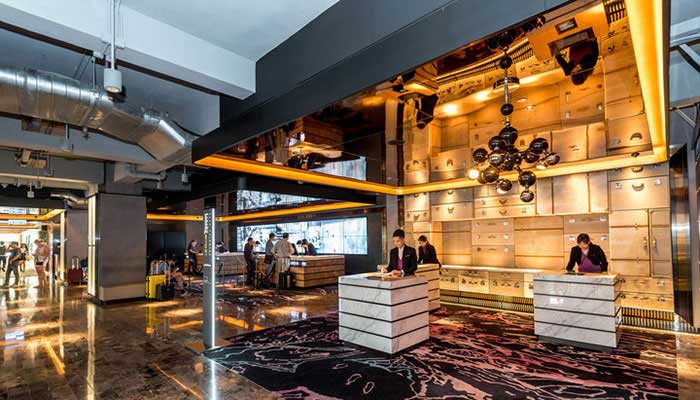 Since Pullman started managing the hotel in 2015, it has undergone a major renovation that has injected new life into its walls. Pullman, previously a luxury train brand, defines their customer as the “global nomad”; Pullman delivered this idea with The Park Lane Hong Kong’s renovation by redesigning public spaces and launching new projects.

The lobby area now resembles a train station, the walls adorned with leather suitcases and the floor, rolling gates. There’s also a coffee station in the lobby, allowing their global guests to help themselves as they arrive for an immediate energy boost. Tablets and touching screens are everywhere so that guests can check information with ease. 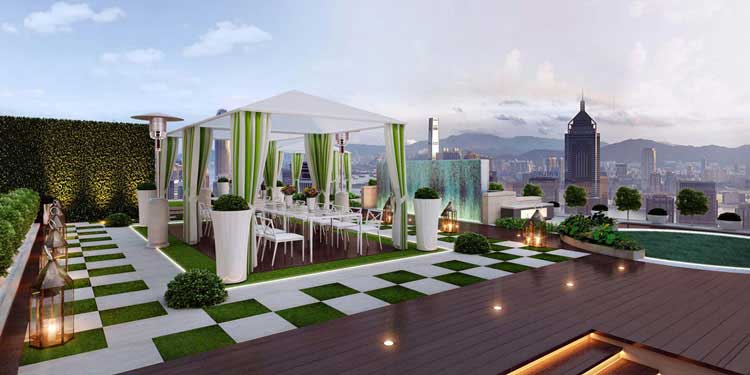 Another eye-catching area is Ebb & Flow, a café located next to the reception area. It is a round-the-clock hangout space serving coffee, cocktails and light bites. As part of Pullman’s Global Art Initiative, The Park Lane Hong Kong launched the Accor’s flagship “Artist Playground” – a project that’s presented at Ebb & Flow, featuring an exhibition that displays art pieces from emerging local artists, changing every three to four months. 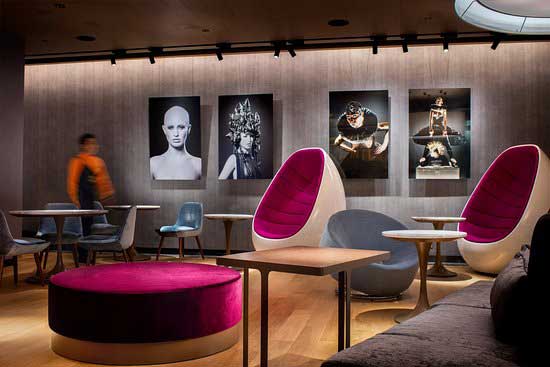 Make your way to the very top of the hotel and you’ll find a bar called SKYPE. It’s the new hotspot in town, with a seasonal cocktail menu and a fantastic view of the Harbour. It is probably the biggest outdoor rooftop bar in Hong Kong. In the evening, light fills the bar thanks to the backdrop of Hong Kong’s skyline. No reservations taken, just walk in and enjoy. 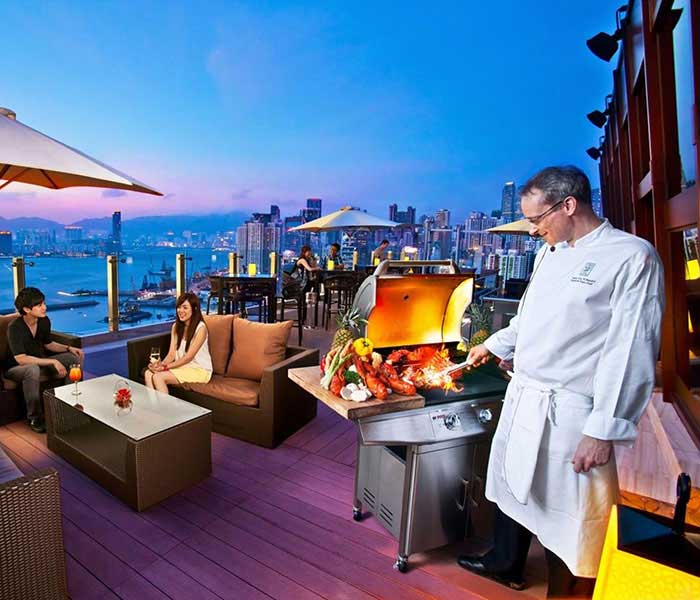 Shangri-La Group has made a massive contribution to the development of Hong Kong’s hotel industry. Kowloon Shangri-La opened in 1981, setting the benchmark for hospitality in Hong Kong. Edward, the lobby ambassador, has been working for the hotel since 1981, and has repeatedly been given the Best Hotelier Award by the Hong Kong Tourism office. 10 years later, Island Hong Kong Shangri-La opened. The 56-storey building was once the highest hotel building on the island. Its two-Michellin-starred restaurants are must-visits for global diners. 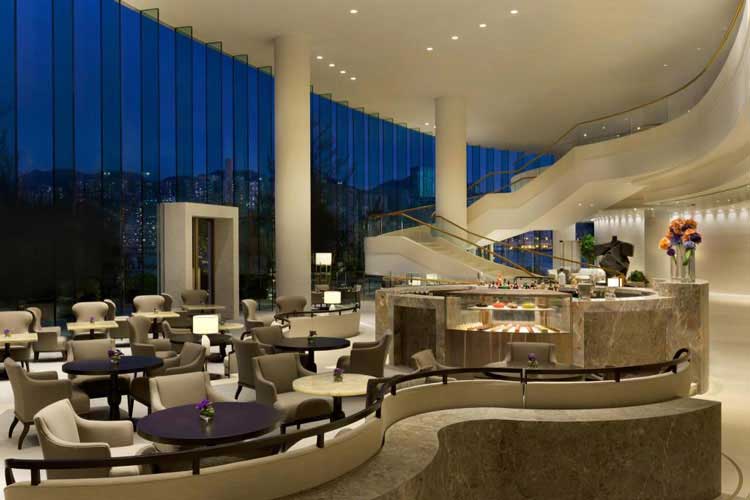 With the heritage, the newly opened Kerry Hotel Hong Kong invited Andre Fu – the designer of Upper House in Hong Kong – to switch up Shangri-La’s look. As the urban chic brand of Shangr-La, the concept of the first Kerry Hotel in Hong Kong was an “urban oasis”. Fu used the colours grey and brown to set a modern and simple tone for the whole hotel. Thanks to an 80-metre-wide window, Guests enjoy a panoramic view of the Hum Hong bay upon arrival in the hotel lobby. Outside of the window, guests can find an outdoor garden, a true rarity in this city.

Let’s talk dining experiences: Kerry Hong Kong is the only hotel that offers outdoor dining areas for every single restaurant in the hotel. No matter if you’re in the Lounge Bar, Red Sugar or Big Bay Café, guests can enjoy food at an open terrace with Kowloon Hong Kong in the background. 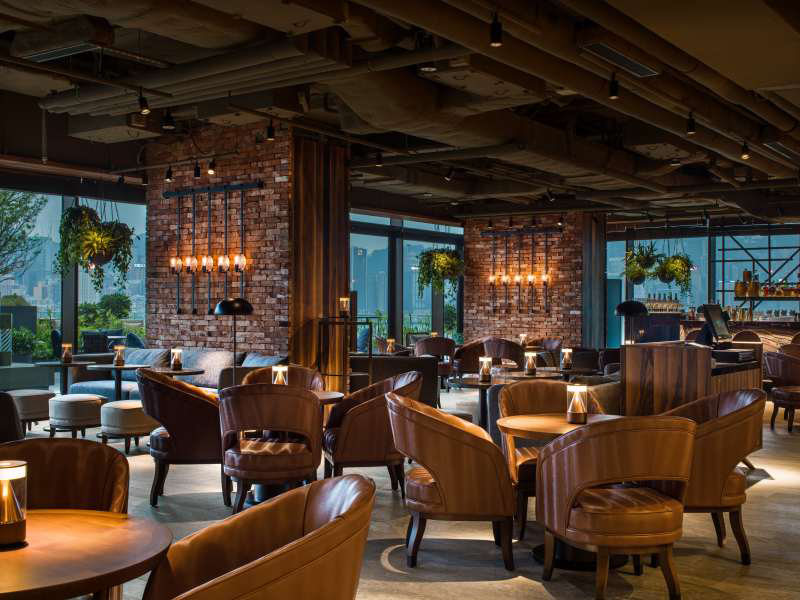 Over 60 per cent of the 546 guest rooms feature bay views, while room sizes start from 42 square-metres – that’s huge for Hong Kong. The open studio style of the room with clean lines and light colours touches the current preferences of younger generations. 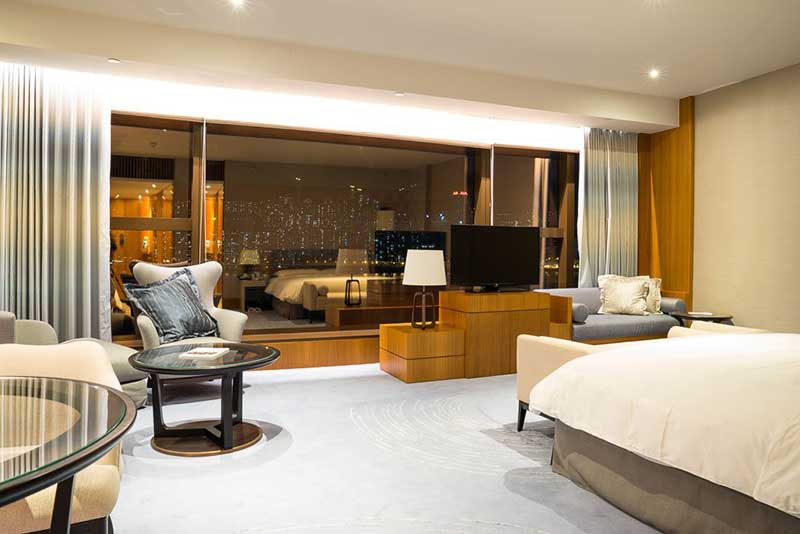 The Murray, a Niccolo Hotel

Although the hotel is managed by the Marco Polo Hotel Group, The Murray will keep its original name due to the property’s historical glory: it was once a government office building, which housed some key bureaucrats from the Hong Kong government.

MB was designed with its windows meticulously oriented to avoid intrusion of excessive direct sunlight. This design won the Certificate of Merit of the Energy Efficient Building Award in 1994.

The renowned architect Norman Foster is known for modern designs of steel and glass, and innovative contouring. Most of his works are innovative in their use of original constructions and inner spaces. The three-storey-high arches in the original building remained, morphing into an indoor and outdoor space that can host up to 300 guests. Another highlights is the rooftop area, where guests can enjoy views all the way from the Murray Lane to Guo Fu Lou. 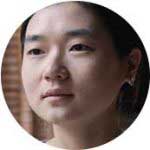