MIDNIGHT ON THE EASTERN & ORIENTAL EXPRESS

It was midnight on the Eastern & Oriental Express, somewhere in the Malayan Peninsula, and on the outside observation deck at the rear of the train, a handful of passengers were gathered like the suspects in an Agatha Christie novel. We were sipping brandy, talking in low voices. Cigars glowed.

Beyond the handrail, the jungle was a rush of leaves. The sweet stench of tropical flowers overpowered the deck. From time to time the lighted doorway of a kampong floated past in the darkness.

A lone Frenchwoman was lighting a cigarette in a long holder. She was thin, austere, rather terrifying, with a profile like Borgia pope.

“I think she’s beautiful”, Jones whispered to a man with toupee. “Such perfection. Such allure.”

Jones was an ex-planter, a florid man with a stained safari suit and a proprietorial air about Malaysia. Behind him was the Ancient Mariner, an elderly Englishman travelling the world with a long face, a banner of white hair, a wayward Adam’s apple. Travel had made him a bore. He cornered the other passengers with interminable stories about the customs regulations at Rangoon airport. 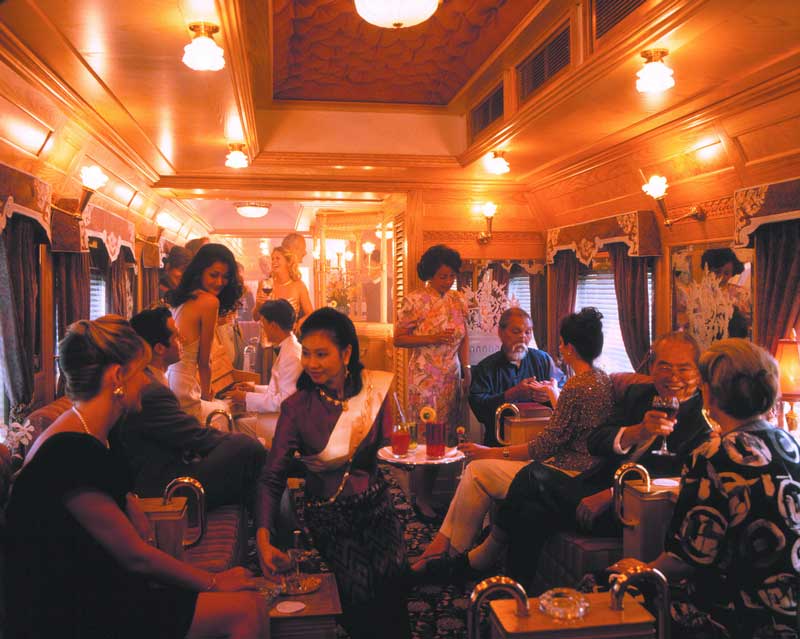 The carriage swayed and we all gently bumped one another. Trains are communities without moorings, the passengers unfettered by the restraints of home. In this rush of landscape we were all exaggerations. The timid became recluses, the brash became showmen, the Americans all seemed to come from Kansas.

I had become a sort of low-rent lothario in a linen suit and a Panama hat. My companion was the Marlene Dietrich of this train, tall, elegant and very beautiful. She had a mysterious accent and no one could pronounce her name – even the Thais, for whom unpronounceable names are a way of life.

We rattled on into the night. Moonlight flooded the rice paddies. The pulse of the wheels quickened. Trains promise revelations. Down the corridors of the sleeping cars there is a strange intimacy amongst strangers.

Like the revamped Orient Express in Europe, the Eastern & Oriental comes chugging out of the golden age of railways. Travelling between Bangkok and Singapore several times a week, the carriages belong to a world when first-class trains were the well-upholstered outposts of London clubs or Viennese salons. The dining car offers an exotic menu that would please the head chef in Raffles and the wood-panelled compartments bear the same design features of the train used in the 1932 film, Shanghai Express. Afternoons can be spent in the Reading Room and evenings in the art-deco bar, where the jazz pianist will find something to put a lump in your throat. At the rear of the train the open veranda of the observation car is a ringside seat for viewing south-east Asia.

On an early February afternoon the passengers had assembled in the VIP waiting room in Bangkok’s station. Uniformed bell boys struggled with expensive luggage as a few of the ‘guests’ introduced themselves to each other. A large American, like a slab of prairie wrapped in a suit, shook my hand. ‘Name’s Hunter.’ He had a vice-like grip. ‘Call me Dick.’ Dick was Kansas born and bred. He was something in second-hand cars, but like any good dealer he was hoping to go into politics.

Smart attendants stood at the doors of the green and cream livered carriages, their palms pressed together in greeting, an honour guard for a lost age of travel. We climbed aboard and waited for the drama to begin. The station master waved a green flag, and we were away.

In the outskirts of Bangkok women were busy beating the family laundry to a pulp on rocks. At cross roads shoals of motorcyclists waited for us to pass. Beyond the city we rattled through a landscape of sodden rice paddies and bedraggled banana groves. Among the crooked palm trees were timber houses on stilts, raised above the threat of floods and snakes. Children playing in the yards stopped their games to wave as we passed.

Dinner was a splendid affair with the kind of service – starched linen, fine china, crystal, silver cutlery – that trains seemed to have abandoned in the days when conductors still cried ‘all aboard’; We ordered medallions of beef. Jones was at the next table starting on his second bottle of claret.

“Oil plantations”, he said in response to my enquiry. “I used to have a plantation in Johor. Very isolated. Most of the neighbours went mad.” Some trick of the light had elongated his reflection in the train window, like his ghoulish twin peering in at us.

Further down the carriage the Frenchwoman was dining with the Ancient Mariner.

“There are so many different forms. Customs declarations, immigration statements, health forms”, he said. The Frenchwoman chewed her food with precise, deadly movements, eyeing the Ancient Mariner above the flash of cutlery.

A huge hand clapped me on the back, and I swallowed a sea scallop. It was Dick.

“The Main Man”, Dick said, as if we were high school chums meeting at a class reunion. “Careful of the oysters”, he said.

After dinner we retired to the observation deck. Rocking like a cradle, the train had entered a water world of canals and wide pans of dark water awaiting rice. A ladder of lights from the windows ran along beside us. The Frenchwoman leaned over the rail, eyes closed, scenting the landscape like a Labrador at a car window.

“Comme Indochine“, she whispered. “The smell of childhood.”

Later in the bar, a few survivors were making a late night of it. The pianist was a jolly Singaporean with a limitless repertoire. The Ancient Mariner, seized by homesickness, asked for The White Cliffs of Dover. “Blue birds over…” he sang tunelessly to the Thai waitress.

Dick was at the next table with his wife, Dot, who fluttered nervously at his side like a thin starling. The pianist was playing April in Paris.

“Great city, Omaha”, Dick said to me. “Soy Bean Capital of the West.”

The pianist embarked on a rousing ragtime. Under the influence of a fine meal, a bottle of Chardonnay, and Scott Joplin, the French woman had lightened up, and was trying to find a dance partner. Jones obliged. He proved to be quite a mover. “The Cafe Royal”, he explained. “After the war.”

The next day we rolled southwards through green carpets of rice. Later the claustrophobic plantations closed in, first the spindly rows of rubber trees and then the thick-trunked oil palms. No wonder the planters turned quietly to drink, adultery and madness.

Jones had appeared on the observation deck. “The English planters went home or they went to Australia.” he said.

“Eastbourne”, he said. “I had got used to claustrophobia.”

Later the plantations were replaced by Malay jungle, a confused mass of greenery and pale trunks.

“Look, a monkey”, someone cried. A macaque with a grey, unshaven face, like some relation of the Ancient Mariner, shrieked at us as we rolled past, baring yellow teeth. Later in the bar over cocktails, the French woman was thrilled with our encounter with wildlife. “Did you see his face?” she said, her nostrils flaring. “So primitive, so feral.”

At Kuala Lumpur station, where we paused just after midnight, my companion and I strolled along the platform, stretching our legs beneath extravagant, onion-domed cupolas and Moorish arches. Many of the passengers had already retired. The curtained windows glowed with lamplight. In a connecting passage between carriages we spotted the Frenchwoman in a romantic clinch.

“I thought she looked lonely”, my companion said.

“Yes, of course”, I said. “But Jones?”
In the morning after breakfast we gathered on the observation deck to watch the last act of the drama, the run across the long causeway that joins Singapore to Peninsula Malaysia. The gleaming towers of commerce rose from the sea like a celestial city.

In the tall waiting room of Singapore’s station, we shook hands with our fellow passengers amid found farewells. I remembered a line from Paul Theroux’s Great Railway Bazaar: “I sought trains; I found passengers.” We dispersed to waiting taxis. Jones and the Frenchwoman shared a cab into town. 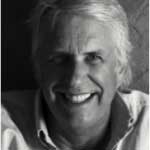