SOUL-SEARCHING: MEETING WITH A SHAMAN IN GUIZHOU

The shaman had agreed to see me just after lunch. It seemed a disappointing hour to engage with the next world; but apparently she had a hairdressing appointment later in the afternoon, followed by a family dinner. 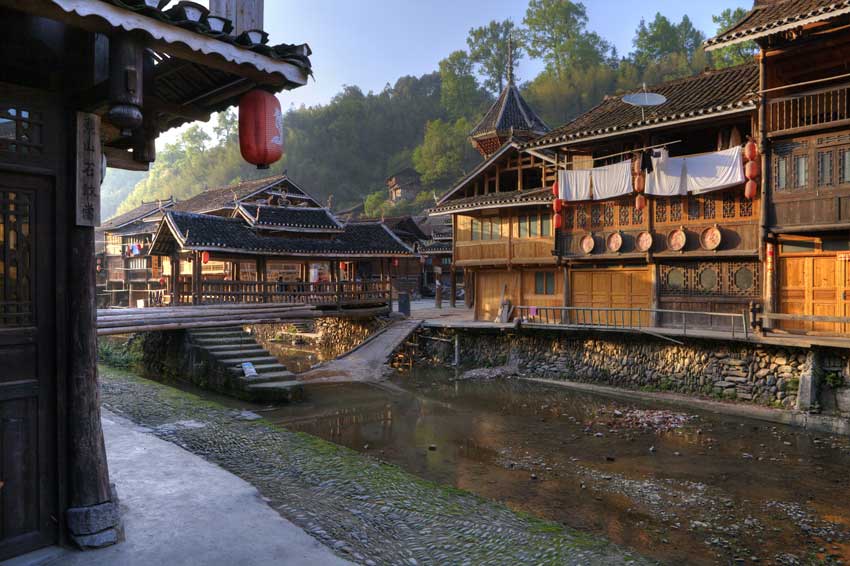 I had come to Zhaoxing in China’s Guizhou province. Wedged between the more famous destinations of Yunnan and Guilin in the remote south-west of the country, Guizhou is a byword for provincial backwardness among the urban sophisticates of China’s growing cities. Largely composed of mountains and rice paddies, the province inhabits a China untroubled by double-digit growth figures. A Chinese saying describes Guizhou as ‘a land without three hectares of flat country, three days of fine weather, or three coins to rub together’. What no one seems to describe is how beautiful the province is –  it’s as traditional and as delicate as a Chinese painting. 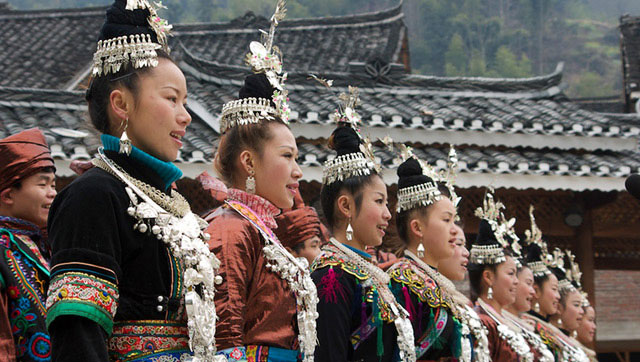 Miaou and Dong Dressed up for a performance, Guizhou – via Bejing Hikers

In the ramshackle villages, wooden houses lean against one another under a patchwork of grey-tiled roofs. On the mountain sides, terraced rice paddies cling to the steep slopes. Along the banks of the Bala river, green as jade, waterwheels creak, fishermen throw nets in elegant arcs, and shaven-headed boys float downstream on inner tubes. Guizhou is populated by ethnic minorities like the Miao and the Dong, whose distinctive dress, customs and festivals make them among the most interesting tribes in south-east Asia. 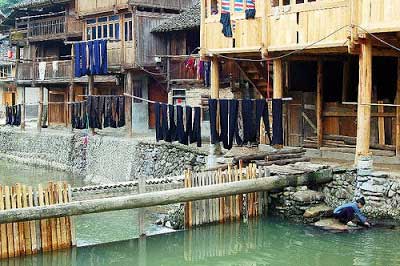 Zhaoxing is a Dong village, a splendidly, higgledy-piggledy sort of place, threaded by narrow cobbled alleys and crowned with conical Drum Towers. From the balustrades of first floor balconies, all manner of things hang: corn cobs, laundry, dyed cloth, children, spun wool, drying radishes, mops. On the raised stone pavements along the river, women were attacking lengths of indigo cloth with large wooden mallets, while down in the market, the butcher was carving up a carcass that looked suspiciously like a family dog. 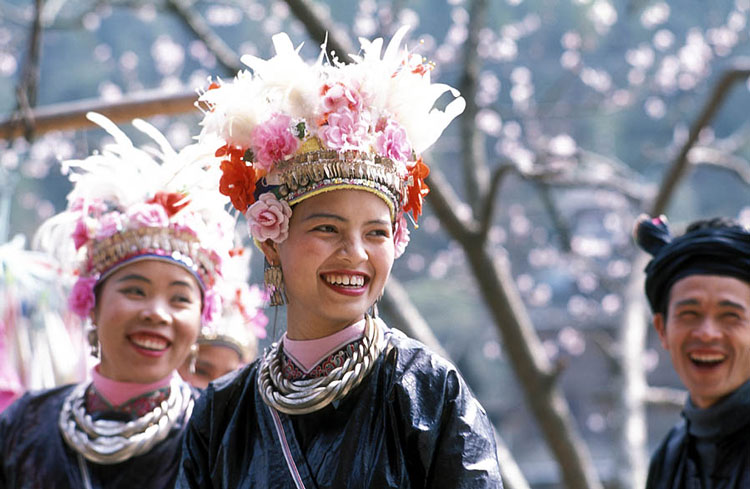 For the Dong, indigo is the new black. All over town, sheets of freshly dyed indigo cloth were laid out to dry – the hammering gives it its characteristic sheen. Men and women alike are dedicated to indigo, but the women jazz it up with the most spectacular embroidery. The Dong are the great artists of the embroidery world, and their jackets and skirts are intricate masterpieces. 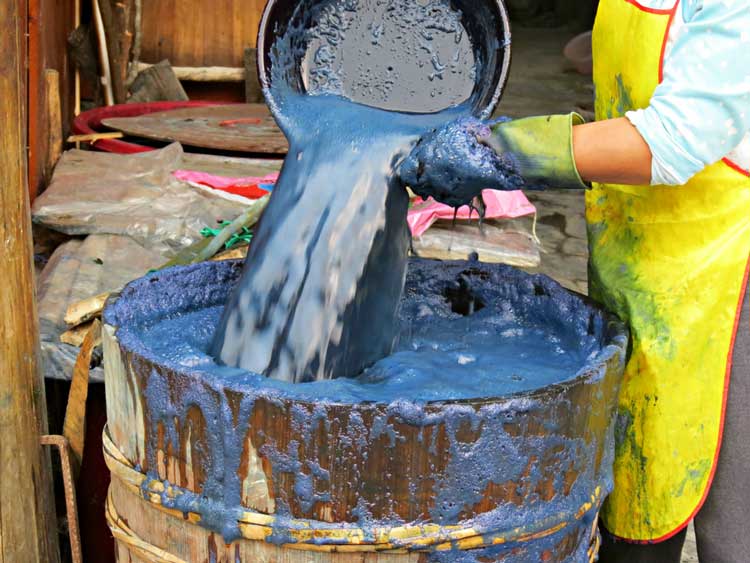 Cloth being dyed with natural indigo in Guizhou, China – via Fiveprime.org

What the women do with thread, the men do with wood. The Dong are brilliant carpenters, and Zhaoxing is a tribute to their skills. Most villages would be happy with one Drum Tower. Zhaoxing has five, each more splendid than the one before. With as many as fifteen storeys of overlapping roofs, the towers were built as they were a thousand years ago, without the use of a single nail. In the open-sided space beneath them, there are benches for village gossips; while above in the roof spaces, gongs and drums are suspended, ready to announce catastrophe like fire, invasion, or the arrival of a Chinese tour bus.

The other impressive constructions are the Wind and Rain Bridges – there are five classic examples in Zhaoxing. They act as the gentlemen’s clubs of the town. Beneath soaring roofs and on long benches against the railings, distinguished-looking fellows, elegantly dressed in classic indigo, read newspapers, grunt in a monosyllabic fashion and fall asleep. 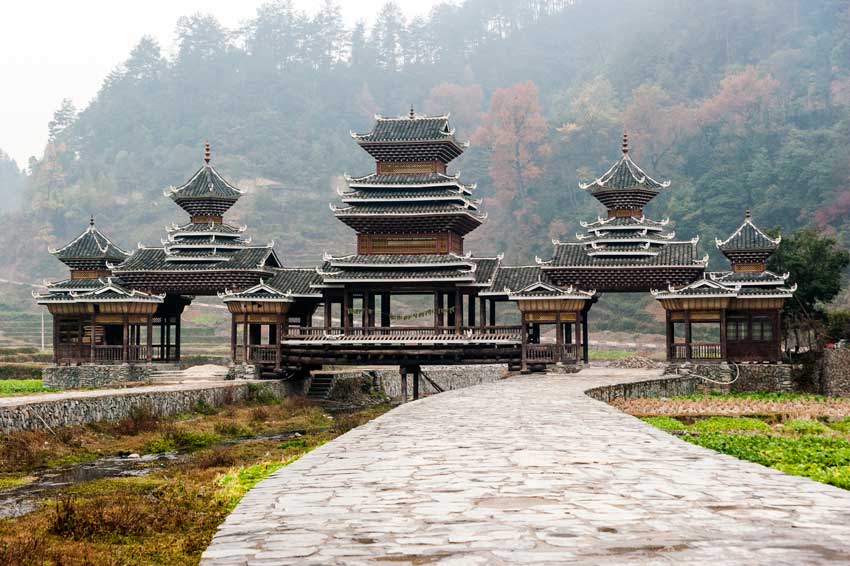 It was on one of the bridges that I was introduced to an elderly chap who gave me the name of the shaman. “First-rate”, he assured me. “Just the right sort. Knows all the best ghosts.”

Shamans are important figures of religious consciousness around these parts. With their unique access to the dead and to the ghosts of those who have gone before, they are able to proffer advice about a range of issues, from financial investments to marriage proposals. Auspicious dates are a speciality. All over these mountains, one will come across coffins left in the fields on the edge of the village, waiting for the shaman to declare the appropriate date for burial. I didn’t have a corpse to dispose of, but I felt I shouldn’t bypass the opportunity to commune with the deceased.

High up in the village of Tang’an, the shaman’s son answered the door, and led us into a room where the shutters were open to a view over grey-tiled roofs. Decoration was minimal: on the wooden walls, there was a three-year-old calendar, showing an Alpine lake and a picture of a Chinese pop star torn from a magazine. 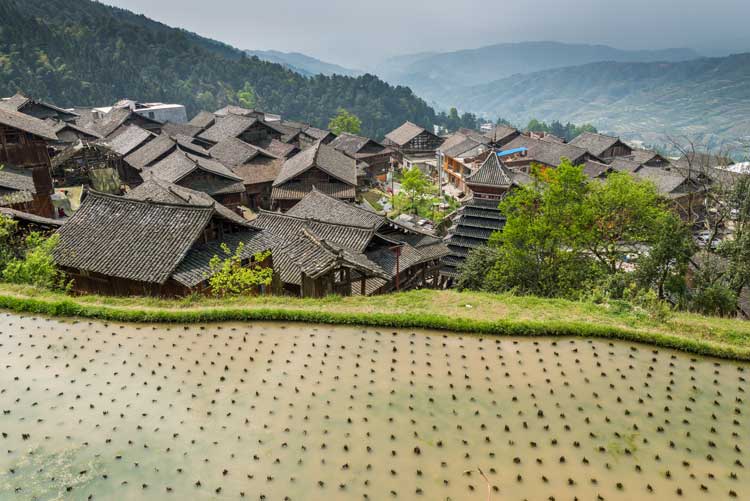 Tang’an village in the backdrop of a terraced field, Guizhou, China

After a moment, the shaman arrived. She shook our hands. She was quite an ordinary looking woman, in an ordinary indigo jacket. Only the piercing eyes seemed to betray her calling.

A fee was negotiated. At just under a pound, my journey to the next world worked out cheaper than a London tube fare from Piccadilly Circus to Leicester Square. Then, we sat down on tiny, ankle-high Chinese stools – the shaman, her son, my guide and I – round a bowl containing grains of rice and a clutch of burning incense sticks.

There was a moment of silence. Then, the shaman dropped her head, lowered her eyes and began what appeared to be a series of breathing exercises, inhaling and exhaling slowly. After this had gone on a bit, she put a tea towel over her head. This was the signal that the serious business was about to commence. Panting heavily beneath the tea towel, she rocked back and forth, alternately grunting, singing, whistling and retching. Her legs and arms jerked like someone suffering muscle spasms. Her son said that she was entering a trance, and would ask ghosts to come to the house.

The next moment, one had turned up, and we were deep into Chinese whispers. The ghost spoke to the shaman, presumably in the language of the next world. The shaman, speaking in a rasping croak, passed the messages on to her son in Dong; the son translated into Chinese for my guide; and my guide reported to me in English. An Ouija board would have been less open to confusion. 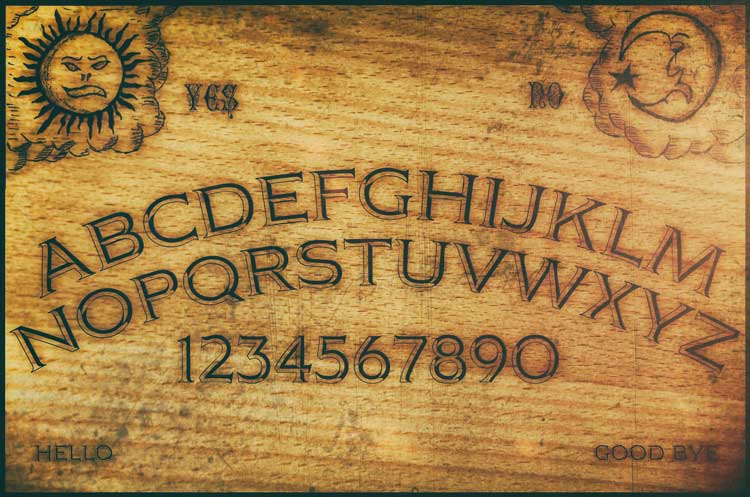 The ghost commenced by announcing that I was a good person, and had done many good things. I demurred. Ghostly flattery was as suspect as the real kind. There was a pause, and then the shaman announced that we needed a duck. The ghost wanted to pray for me, and, apparently, ducks were to shamanism what candles were to Catholics. They set the scene, and it would be difficult to proceed without one.

I nodded an ambivalent approval, the message was passed up and down the line, and word came back that the duck was going to cost 32 yuan, the equivalent of about £2.50. Naively, I had imagined that in the spirit world, our ghost might be able to pick up a ghost duck down the ghost market for next to nothing, but, apparently, a living duck was the thing for prayers. I placed the money in the rice bowl.

Still under her tea towel, the shaman coughed, retched and beat her breast, then announced, in a voice like Gordon Ramsey on a bad morning, that the ghost would come to my house in England to pray for me. I didn’t want to sound inhospitable, but I wasn’t sure I wanted a ghost in dark Dorset. I tried to assure him that prayers here in China, now that we had the benefit of a duck, would be sufficient. I had the added concern that the ghost might need to travel business class Beijing to London, and I might need to add a couple of thousand quid to the rice bowl. 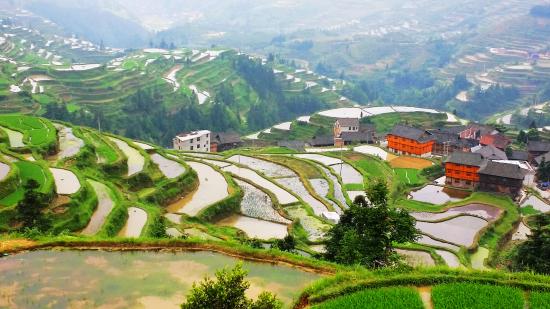 View of Tang’an – via TripAdvisor

The shaman was deep in her own reverie. Singing and whistling, she began to conduct herself, waving her hands in mid-air. Then, she lifted a small cup from a basket, put in a handful of raw grains of rice, and poured in a couple of shots of rice liquor. The bowl was handed to me, and I was told to drink.

A small spider had appeared in the liquor. When I pointed this out, the shaman arched her neck and howled from beneath the tea towel. Word came back down the line. The spider was my soul. I must drink it in order to be whole. I drank.

And that was it. My appointment was over. No forecasts for the future; no handy travel tips; no visitations from deceased relations… Just the reassurance that my soul and I were happily reunited. It seemed too complicated to ask where my soul had been all this time, and why it had chosen to reappear as a spider.

I emerged into a bright afternoon and a spectacular view. Tang’an is a dizzy place, with views that stretch across layer upon layer of mountain ridges. Below me, the steep slopes, sculpted with curving paddies, plummeted downwards to Zhaoxing in the valley far below.

A young boy appeared, and he accompanied me down the stone stairs to the square at the bottom of the village. I asked about his future: whether he wanted to stay here in the village, or go elsewhere for work. He replied that he thought about going away. But he worried he would miss the view. 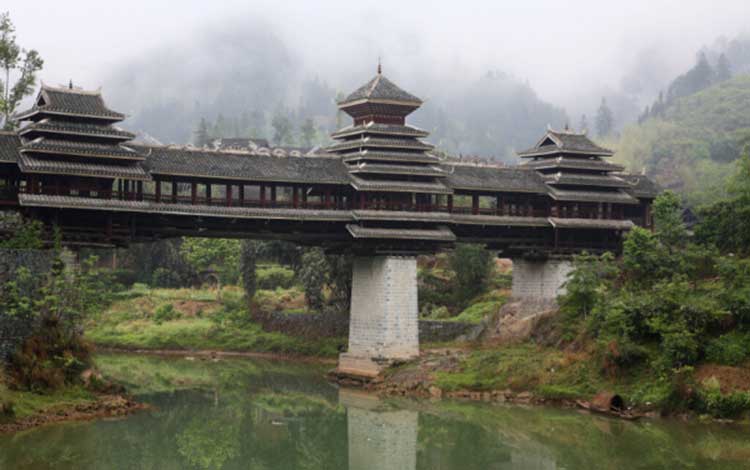 We shook hands, and I walked out of the village and down into that magnificent view, following the old stone-laid tracks between the tiered and sculpted paddy fields, dropping from village to village, each with its dilapidated gateway and its Drum Tower. A burst of rain swept through, and I sheltered under a tree. When it passed, the whole landscape shone. Terraces of rice paddies, as far as I could see, glistened in sudden fresh sun. In his innocence, the boy was right. However far he might travel, he would never find a view as beautiful as the one outside his own door. Or a culture as concerned about his soul. 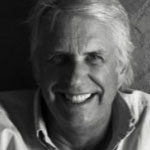